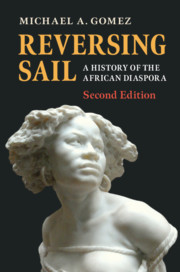 Reversing Sail
A History of the African Diaspora

Part of Cambridge Studies on the African Diaspora

Instructors may request a copy of this title for examination