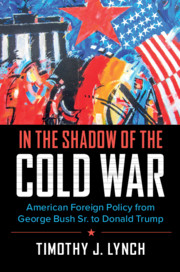 In the Shadow of the Cold War
American Foreign Policy from George Bush Sr. to Donald Trump