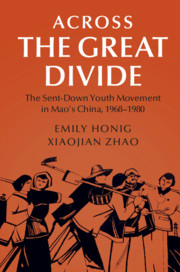 Across the Great Divide
The Sent-down Youth Movement in Mao's China, 1968–1980