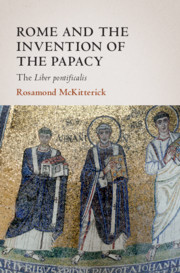 Rome and the Invention of the Papacy
The Liber Pontificalis

Part of The James Lydon Lectures in Medieval History and Culture