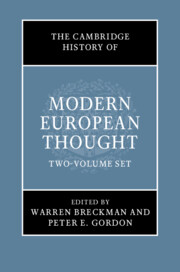 Part of The Cambridge History of Modern European Thought