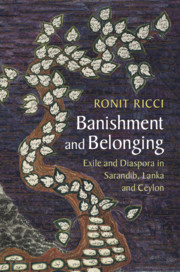 Banishment and Belonging
Exile and Diaspora in Sarandib, Lanka and Ceylon