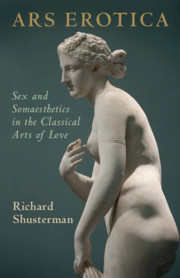 Ars Erotica
Sex and Somaesthetics in the Classical Arts of Love