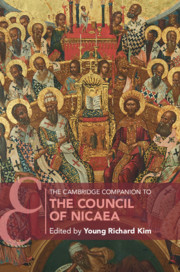 The Cambridge Companion to the Council of Nicaea

Part of Cambridge Companions to Religion